It's finally here, The Second Annual LG Report Cutest Pet Contest!
Please, contain your exuberance.  And please don't pee on the rug. Or scratch the furniture.
We asked each person submitting a pet to include one line about why their entrant should win.  Unfortunately, not everyone adhered to the one-line limit.  So LG is now changing that requirement and will supply his own narrative for each entrant, although snippets of what the owner provided may be included.  Hard to say since we haven't written it yet.
You really can't hold us to any particular standard here, sorry.
The rules for voting are simple:
Without further delay, here ladies and gentlemen are the 2011 competitors for the title of The LG Report's Cutest Pet 2011: 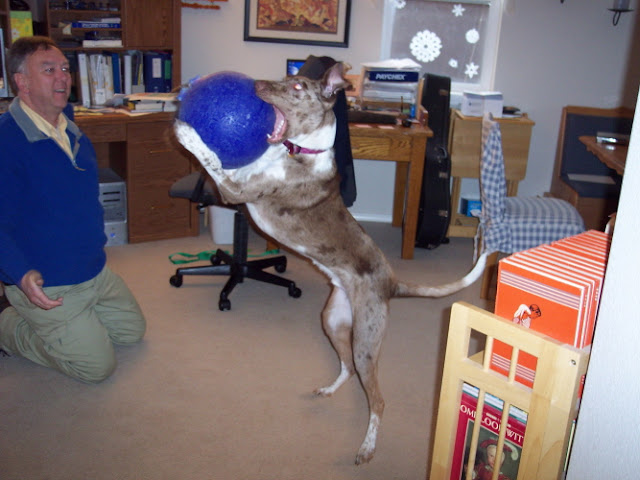 This is LANDO, the ball-catching dog.  Lando is in the center.  Please don't vote for the gentleman on the left, we're sure he'll feel insulted.  Plus, we doubt he can catch a ball as well as Lando. 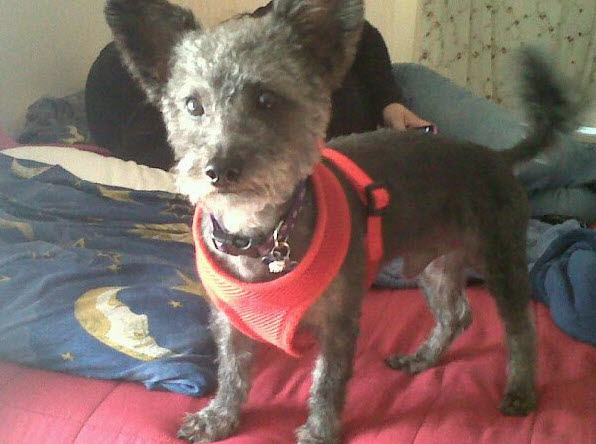 Here we have BLACKJACK, a 6-year old male.  His owner says that Blackjack is "one of a kind, inside and out."  He's smart, loyal and wild.  That orange harness is part of his skydiving equipment.  He's also wearing a Pandora bracelet around his neck.  Don't ask us what the woman in the background is doing. 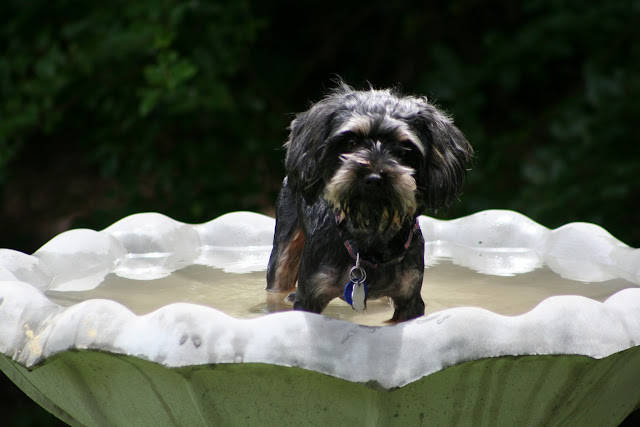 TUCKER is seen here doing his bird impersonation.  He's two years old and has flown south for the winter each of the last two years.  The dog tags around his neck weigh approximately the same as Tucker.  Tucker loves The Rolling Stones, crossword puzzles and most poetry, but he does not like poems that use words that rhyme with his name.  If he wins, we won't know whether to send him dog treats or bird feed. 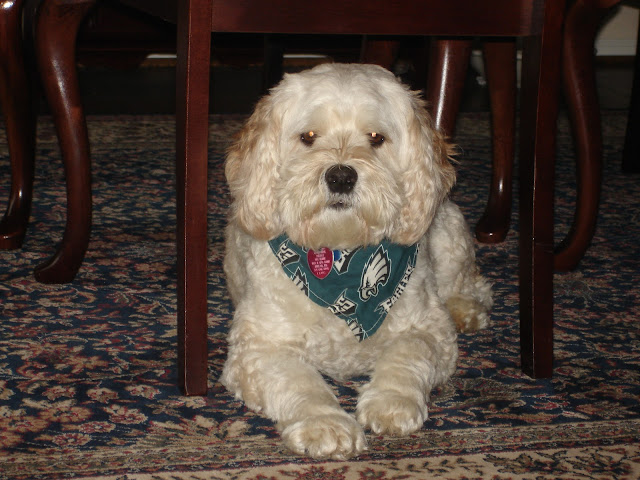 SCOOTER lives in Pennsylvania (hence the Eagles bandanna) and is six years old (although he was only 4 1/2 when this picture was taken.)  His owner says that Scooter "can shake, do a high five, and of course, stick out his red rocket when he gets excited to see me."  "Red rocket" was the most risque phrase that we could get past the censors.  Tucker reminds us of Charlie Sheen, although Charlie is not that great at high fiving.  He's got the red rocket thing down however. 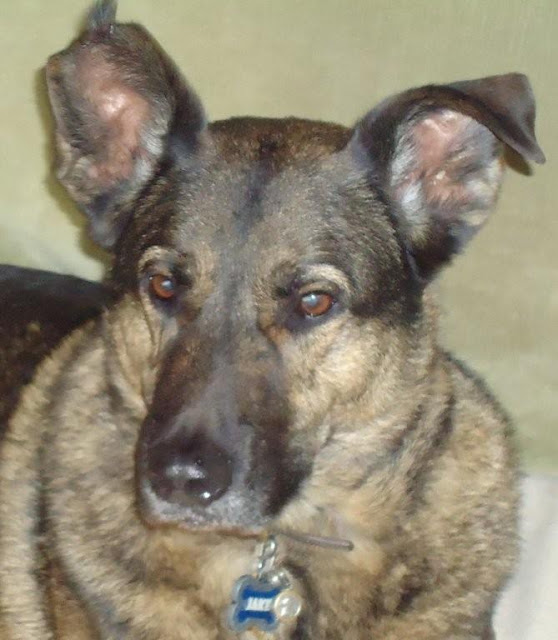 JAKE lives at the Jersey Shore, where he enjoys surfing, sleeping and not watching the TV show "Jersey Shore."  He's a deep thinker who measures his words carefully.  Jake doesn't like being called "Jacob" (not his name) and he loves his daily walk.  He's a Republican. 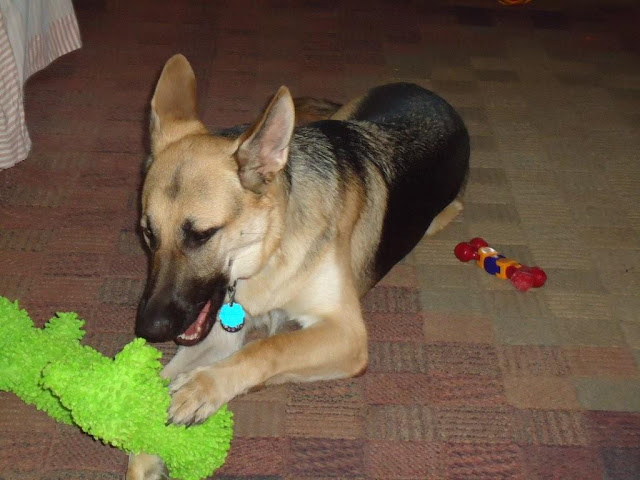 SOPHIE is seen here attacking an innocent dog toy.  She's only a bad dog when she's awake, otherwise she's very well behaved.  She chews on just about anything that moves or doesn't, and is great at tracking mud through the house and jumping on people with mud on her paws.  She has some good qualities, we just can't think of them right now.  If Charlie Sheen were a dog, he'd hang out with Sophie.  Coincidentally, Sophie's catchphrase is "Chewing, duh!" 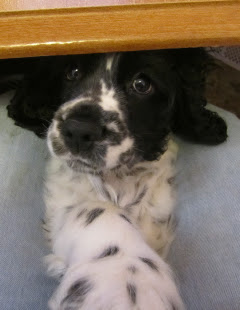 TOBY, says his owner, "is a smart, funny, hyper, trouble seeking, little stinker who loves to string toilet paper all over the house."  This photo was taken when Toby was only three months old.  He loves playing chess and tinkering with the engines of old cars. 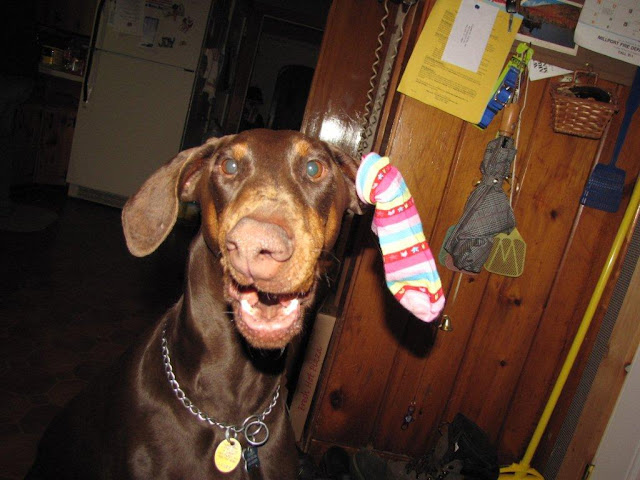 This is COFFEETREE'S CRIMSON CRUELLA, who, according to her owner, is a "killer Doberman ... [and] frisbee toy chaser extraordinaire."  It appears that she's wearing a sock on her ear. Don't ask us why.  Maybe the owner will clarify in a comment.  Cruella's house must have a lot of flies, we note the fly swatter hanging within easy reach.  Although it's high-end, personalized fly swatter with the initial "M" prominently showing.  Or is that a "W?" 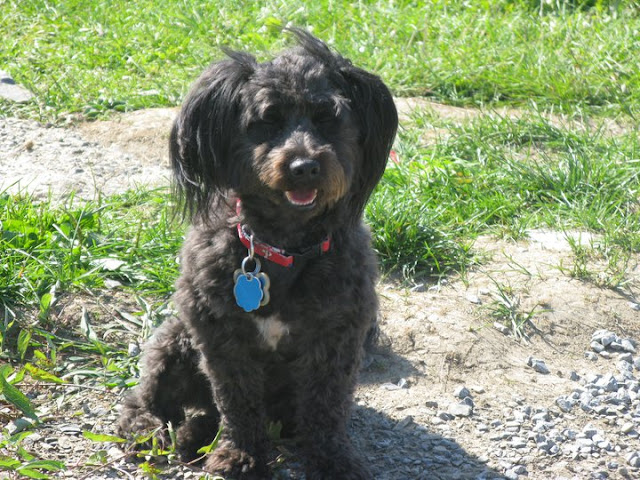 Papoo loves to chase cats, balls and, he says, he's "...the reason my mommy doesn't need a third child!"  Papoo's owner needs to seed that lawn a bit, kind of embarrassing, no?  Papoo is a big Phillies, Eagles, SixersFlyers fan who lives in suburban Philadelphia.  He's hoping for an invitation to the Royal Wedding in England.  Papoo was the name of a character in "Seinfeld," we're not sure if there's a connection.  Seriously though, get that lawn seeded. 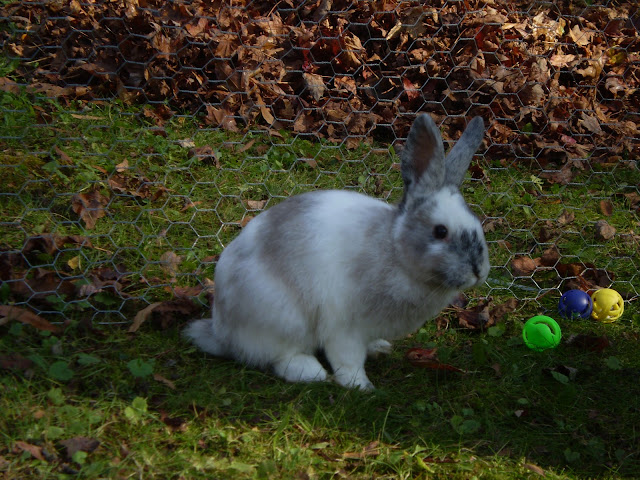 OREO, 1 1/2 years old, "...loves strawberry tops, apples, lettuce, and of course carrots. Oreo likes to dig and he also likes to play ball," according to his owners (Athena and Alexis.)  You'd think he'd also like Oreo cookies, no?  In this photo, Oreo stares longingly at some colored plastic balls just on the other side of the chicken wire fence.  Poor guy, someone help him out. 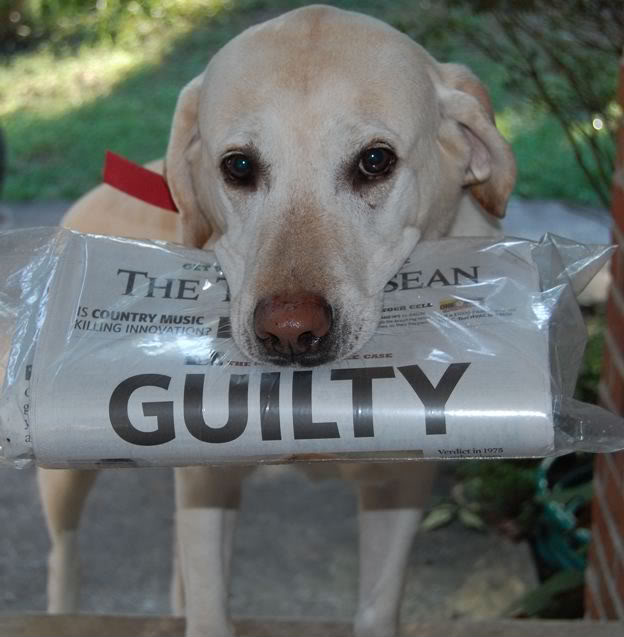 According to his owner, DEACON D. DAWG's "special purpose in life (referencing the Steve Martin picture: The Jerk) is to retrieve the paper, every Saturday and Sunday morning."  Here he's seen with an edition of the local paper announcing a guilty verdict. Deacon doesn't read the newspaper himself, although he has been known to make use of it for other purposes at times.  He's a big fan of the University of Tennessee's sports teams and loves country music. 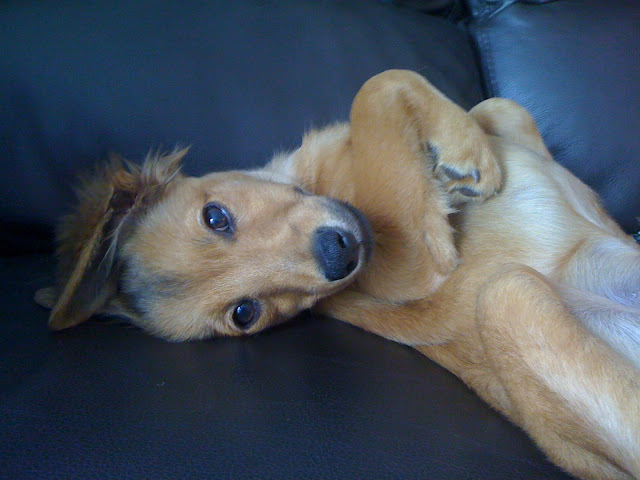 ROMEO, only four months old, is, according to his owner "...a rescue pup, with a heart of gold, and he is at his happiest with a lap to lie on and a continuous tummy rub."  Romeo has the distinction of being the entrant who lives the farthest away from The LG Report's corporate headquarters...he hails from South Africa.  Hence, since he's in the Southern Hemisphere, Romeo's pose appears sideways.  In South Africa, this would look rightside up (If you believe that, LG has a bridge to sell you...)

So there we have it folks, the entrants in the 2011 LG Report's Cutest Pet Contest.  Please get your votes in soon!
Posted by Lazarus at 11:52 PM