Last night we held our eighth annual, or so -- nobody remembers precisely how long it's been -- holiday dinner among a group of friends. We all worked together at a formerly-admired-but-now-vilified financial institution in the 1990s.  I won't say the name, but I will tell you that none of us caused the company's problems.  I left there in 2002, so I'm really above suspicion.  And it has paid back much of the government bailout money already, so back off Mr. Disgruntled Taxpayer.  Thank you.

Below is a partial photo of the dinner crowd from last night.  We ate at Harry's Italian on Gold Street in Manhattan.  They served up some pretty good grub, but don't consider that an official restaurant review.  I'll write some restaurant reviews in the future but they'll be much more comprehensive than merely "pretty good grub."  I know, you can't wait.  KFC will make the cut.  I hope you're not disappointed. 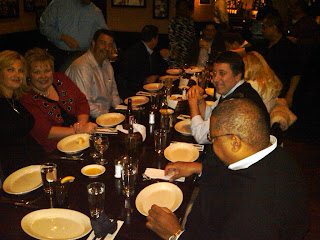 Back to our dinner. We had a great time, as always.  A recent tradition at this dinner involves me inventing stupid bars games upon which a few of us wager.  Usually these contests involve things like olives, ashtrays (when bars still had them), toothpicks, coins, etc.  This year I decided to get really innovative, so I paid a visit to the local dollar store.  It's on the southside of 23rd Street near 2nd Avenue in NYC.  If you live or work here, I'd advise that you not waste your time on this particular store.  Nonetheless, I purchased, among other things (even a bad dollar store can get my business), a pair of goggles and a ladies' bra.  And, in case you're wondering, no, it wasn't the bra of the lady working the register, it was a brand new bra.  Most people don't expect that you would find a bra at a dollar store.  It actually set me back $4.99  -- it's not a true dollar store -- those liars! I purposely left the price tag on the bra so that nobody at the dinner would suspect that I had stolen it from a female acquaintance, paid or otherwise.

The woman at the register shot me a cold look when I made the purchase, one of those "I know you're a total pervert and I shudder to think what you're going to do with this when you get it home" kind of looks.  You know the one I'm talking about, you get it regularly.  Or am I the only one?

I'll bet the cashier imagined hearing the bra pleading with her to not sell it as she was stuffing it into the bag.  Too bad.  I forked over my money and made off with my overpriced bounty.

I brought the bra and goggles to dinner, along with a super ball, which I had at home already (doesn't everyone?)  A bolt of inspiration led me to devise a game involving the bouncing of the super ball off the bar (from behind a line designated by a straw) and into a cup of the bra while the bra rested on top of a pint beer glass.  One bra cup was folded over on top of the other, so only a single cup would be in play.  We used American rules, not European or Olympic, which, as you know, differ.

If a player managed to keep the super ball in the bra cup, he got a full point [I know I should use the politically correct he/she designation but only males play this game.]  If the ball hit the bra cup and bounced out, the player earned half a point.  If the non-throwing opponent, who had to stand behind the bra and try to catch the super ball after each attempt, touched the ball and it bounced off his hand and behind the bar, then the ball thrower (shooter? we'll go with that...) was awarded an additional one-half point.  To make it more interesting, and more complicated, the shooter had to wear the googles.  They gave everything a distorted bluish look.  Here's a picture of champion Bra-And-Super-Baller Mike Kambos shortly after the game: 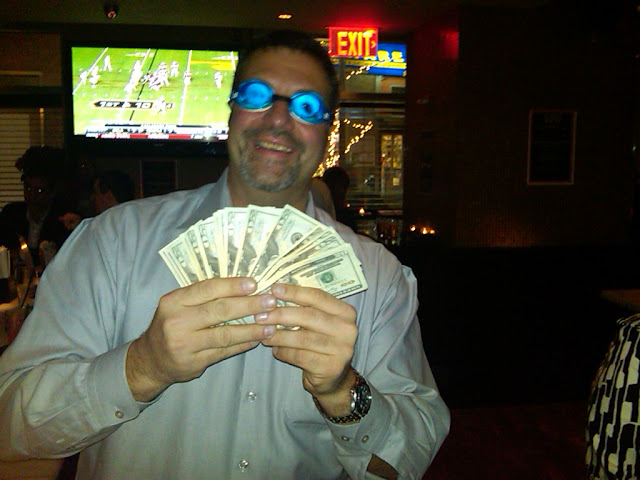 I posted that photo in an extra large format so as to cause Mike extra large embarassment.  Incidentally, he only won $5.00; that wad of cash that he's so proudly displaying was everyone's share of the cost of dinner.  If you ask me, and I'm sure you would if you could, he looks somewhat like a mentally disturbed aviator from the 1940s.  Charles Lindbergh is rolling over in his grave.

The game had to be cancelled during the second match after the ball bounced out of the bra cup and into oblivion.  Our zealous search efforts, which even took me into the main dining room of the restaurant, yielded nothing.  I believe that one of the restaurant's staff, who objected to our commandeering half the bar surface for our rowdy-and-inane game, became annoyed and simply hid the ball from us.  Personally, I've cleared the bartender from suspicion because she was quite amused by our antics and enjoyed watching.

I'm thinking of offering this new sport on pay-per-view. I'll need a catchy name, maybe "Bras-ketball."  I'll work on that and get back to you.  Maybe we'll even start a nationwide Bra-sketball league.  I'm not sure if using a hyphen in the name is too heavy-handed of an attempt to call attention to the clever pun.  I'll have to run a focus group on that.  Maybe we'll call the league the National Bra-Sketball ASSociation (NBA).

Bra-sketball, as you would guess, was a highlight of the night.  Here are some more photos: 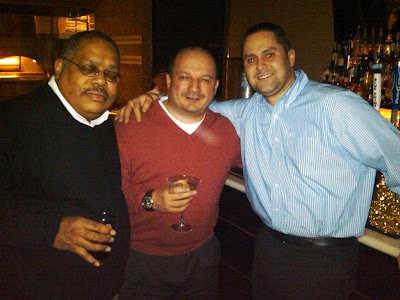 This picture depicts George, Ray and Ron. I know that it looks like George, on the left, was sleeping.  But, in fact, he was just resting up before unleashing a torrent of activity on the crowd.  Or maybe he was thinking "If I close my eyes LG will go away..."

Because of the way I formatted this photo I need to fill this white space on the left side with something even though I have nothing further to say about this picture.  These sentences now are merely filler until we get to the bottom, sorry.  It's like all the celery that you get in Chinese food at certain restaurants.  Think about that next time you order a Chinese meal with vegetables in it. Count the pieces of celery.  See, this space wasn't such a waste afterall! 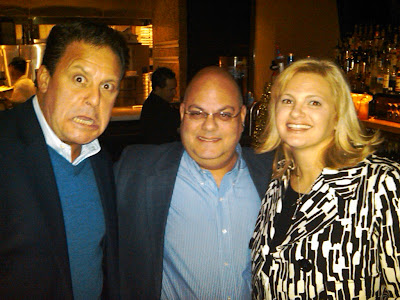 This is a picture of Ron, Anthony and Leslie.  I'm not using last names because none of these people gave me their permission to post their photos on this blog and when they find out that I did, at least they'll be happy that last names weren't used.  Ron's facial expression was a result of him being told  told that he'd be denied access to The LG Report on blogspot.com.  Boy was he mad!  Seconds after the photo was snapped, I told him that I was only kidding.  He breathed a huge sigh of relief and calmed down.  You can imagine how angry that would make a person!  Luckily you have not been denied access and can click on this blog as often as you'd like.

That's it for this posting.  All good things must come to an end.  But check back frequently, or, better yet, register to be a "follower" and you'll automatically get an e-mail notifying you each time a new post goes up, what could be better than that?!  It's more ingenious than those mountains that turn blue on the Coors can. What a dumb marketing ploy that is: If you can't feel how cold a can is with your hand, then you've probably hit your limit of beers for the night...

See you next time kidz.