LG just returned from four days in San Antonio, Texas, home of the Alamo. He was there for an insurance conference.

Most non-insurance people think of insurance conferences as being filled with golf, cocktail parties and expensive meals with clients and prospects.

Those non-insurance people would be right.  Shhhhhh.....


If you’re interested in seeing pictures from some of those events, accompanied by LG’s usual snarky captions, click onto www.plusblog.org.

Back to San Antonio.

Many cities in America are one-trick ponies. Buffalo is all about Niagara Falls.  St. Louis, the Gateway Arch. Nashville, the Grand Old Oprey. Tampa, the gentlemen’s clubs.  San Diego, the zoo.

San Antonio has the Alamo. And little else. Oh yeah, there is the Riverwalk, which is nothing more than a clever fraud to make tourists think that it’s more glamorous and charming to walk past restaurants and shops when they're alongside a man-made canal/sewer combination. It’s not a poor man’s Venice -- it’s a dead-and-decomposing man’s Venice.

And, to top it off, as soon as you sit to eat at any of the restaurants along the Riverwalk, you’ll immediately be accosted by a louder-than-a-locomotive mariachi band playing in your ear. You will gladly pay them to go away.


The Alamo, frankly, is a disappointment. It’s much smaller and less impressive than even your lowest expectations would lead you to believe.  An Alamo Rental Car counter is more impressive.

No wonder someone had to create the phrase “Remember the Alamo!,” because, otherwise, it would be very easy to forget. It's sort of like “Remember what you had for breakfast last Wednesday!”

Here’s a photo of the Alamo.  The sad thing is that it's actual size: 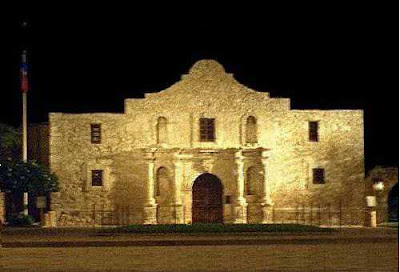 Despite the disappointment of the Alamo, the people of San Antonio are, undeniably, unique.

On Wednesday night, LG was standing on the side of a road in dowtown San Antonio, trying to hail a cab in front of five (yes, five) police officers.  These fine law-enforcing gentlemen had, not ten minutes earlier, arrested (and possibly beaten down a bit, but we can't concern ourselves with such matters) a patron of the bar that LG had just visted (purely for blog research purposes, of course...)

As the arrest was occurring, 30 of the patron’s closest friends streamed out of the bar and into the street to follow the proceedings.  It was a very exciting evening.  LG had never been mugged, or been in a riot, but it seemed that both might very well occur that night.

Anyway, a cab came towards LG, but it didn't slow down as it neared.  This clued LG into the fact that that the cab wasn’t going to stop.  As it zoomed past LG, one of the passengers in the back seat rolled down the window (this is 100% true) and yelled at LG: “Go f*** yourself!”

LG turned to one of the five police officers, about ten feet away, and said “I’ve lived in New York City for almost 20 years and that has never happened to me.”

LG is going to forget this insult and will give San Antonio the benefit of the doubt.  He's going to go have a piece of homemade Texas pecan pie now. Alamo'd, of course....
Posted by Lazarus at 2:33 AM