The captain of the Costa Concordia admitted that he was using a Mayan compass.
Breaking: The Czech Republic, in order to seem more modern, is changing it's name to The Pay Pal Republic.
I said to manager of Home Depot: There's no mirror in the self-check out lane, how do you expect me to check myself out?
Breaking: Arizona accepts $20 million a year to rename state "Arizona Iced Tea." .......... Psych, no it didn't, early April Fool's!
If I were a physical therapist who was really into his job, I'd drive a PT Cruiser.
New campaign slogan: Newt Gingrich - Not as big a piece of crap as you thought!
This is year of the Dragon, was year of the pig in 2011 and in 2010 year of Rosie O'Donnell.
I got arrested for streaking thru Chinatown. Turns out it wasn't Chinese "nude" year, I mis-heard that one. Oops.
If we are what we eat, I just met a guy who must gorge himself on Prick Oven Pizza.
My wife says I spend 68% of my time on Twitter + Facebook. That's surprising, I forgot I had a wife.
Newt Gingrich is sponsoring a golf tourney in Georgia in honor of his marriage: The Atlanta Open.
If I could only invite one historical figure for Thanksgiving dinner it would be George Washington Carver.
Italian Coast Guard is seeking a way to raise a very heavy load that is on its side. They've contacted Rosie O'Donnell's personal trainer.
Gingrich = He drinks "Gin" and he's "Rich." Damn that extra "g" in the middle, ruins my joke.
.
Posted by Lazarus at 12:30 AM 10 comments: Links to this post

Here's a look at some more Walmartians with LG-supplied captions (wouldn't be any fun to just use the ones that came with the photos...)   Enjoy! 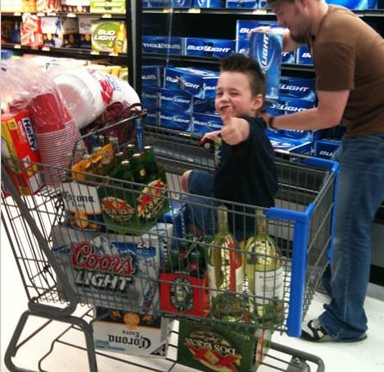 This guy is stocking up for the party to celebrate him being named "Father of the Year" in his state.  The kids is giving the thumbs up sign while asking if anyone knows where the condoms are stocked. 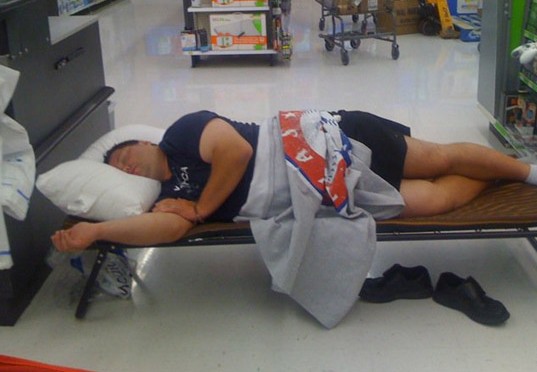 Sometimes the wait for a sales clerk to help you figure out which brand of pork rinds to buy can seem interminable at a Walmart.  Or are they now selling John Goodman mannequins for home use? 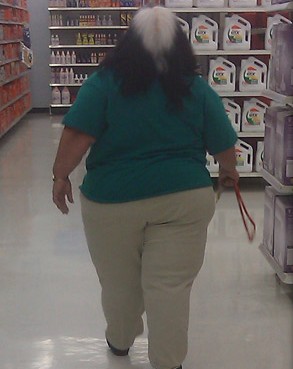 Quick, is this person walking towards or away from the camera?  Answer immediately!  On second thought, is it a person?  Raccoons generally don't carry key chains.  Or is that a leash? 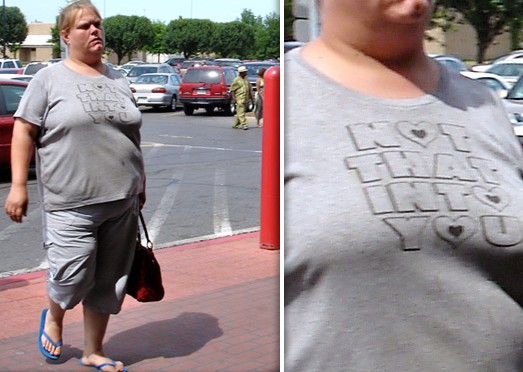 This shirt was trying to give its owner a message.  It was just a plain gray t-shirt when she put it on that morning. 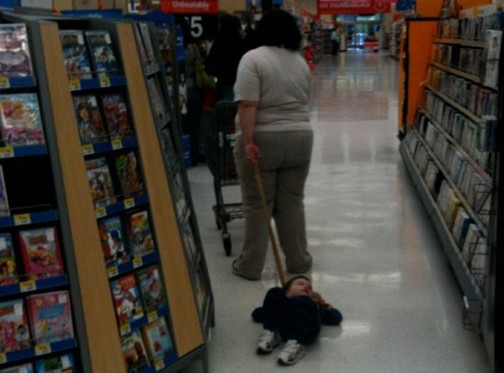 Today is Martin Luther King, Jr. Day.  If you're moved to do something in honor of Dr. King, how about clicking HERE and voting for LG's entry in a contest run by USA Today?  The paper has asked readers to write a speech that they think MLK would give if he were alive today.  When you click on the link, push the "rate it" button and then you'll find LG's entry.  It's titled "The Dream Lives On."  The winning speech will be published in Friday's edition of USA Today and at www.usatoday.com.  LG promises to vote for you if you enter a contest.  Thanks!

The People of Walmart Invade Again

LG is dusting off another stack of photos of illustrious Walmart patrons.  Let's have at it: 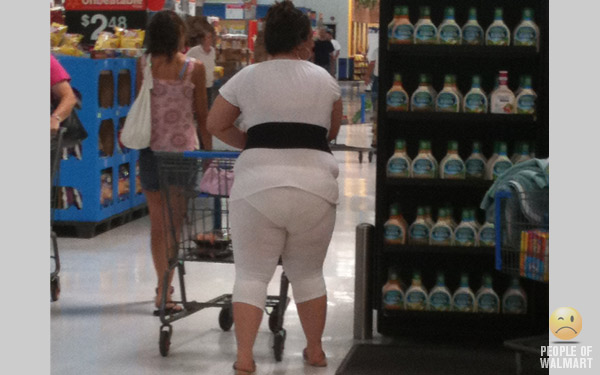 This is the latest style in Asia: A combination black-belt karate robe and a sumo wrestler's outfit.  Oh, and it's complimented with a martial arts version of Depends adult diapers.  Note: This is not a recommended outfit to wear when you're worrying about accidentally releasing a shart. 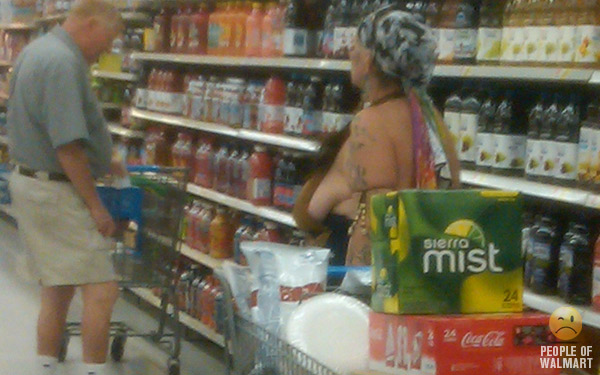 It appears that a breast-feeding baby is still attached to this woman's breast.  Or, possibly, she grew up near a nuclear power plant and now has a leg growing out of her chest.  In any case, this is a rare sight: Someone buying a whole case of Sierra Mist!  That's weird. 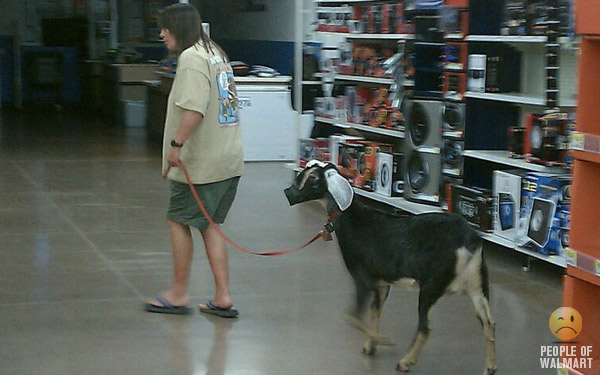 Not really sure why this photo is in here, LG sees nothing out of the ordinary. 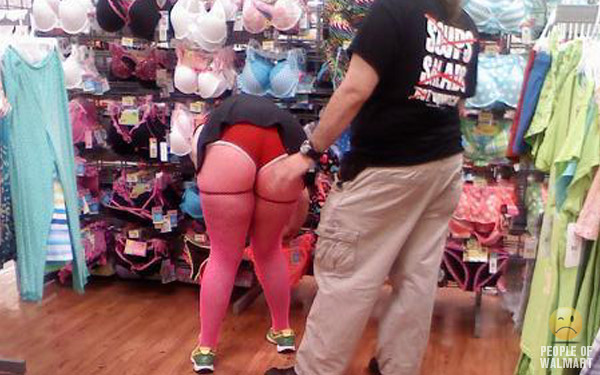 How is this gentleman able to control his animal urges in the face of such sweet temptation?  It's like a flabby Valentine's Day heart with low-hanging boobs.  Hopefully this man has some protection in one of those cargo pockets. 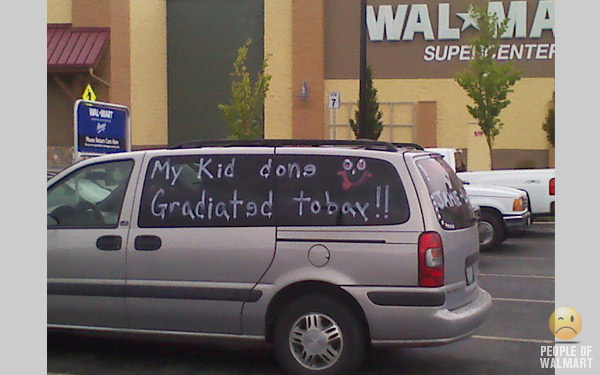 It's nice to see the store manager's parents coming to visit on Gradiation Day. Hopefully the manager is a woman and she looks gradiant in her Gradiation Dress.

One last image for today folks.  It's not from a Walmart, but it's a sign seen in the window of another high-brow retailer: 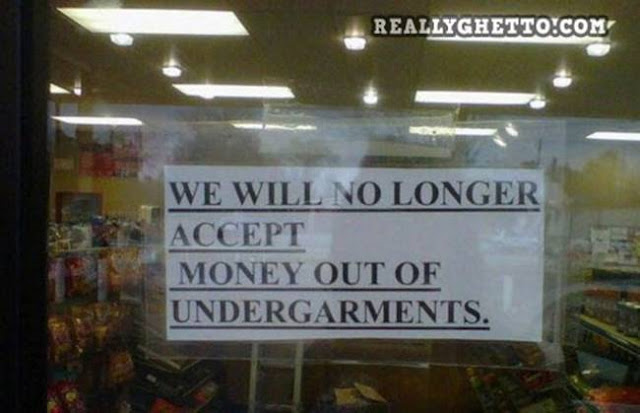 Dang, what is LG going to do with that $50 bill that he's been saving in his boxers since Gradiation Day?

Hope to see you back again soon folks!

As you probably know, LG is well-known and respected in most parts of the world, especially Nigeria and other parts of western Africa (Africa being one of Sarah Palin's favorite countries, of course.)  Well LG recently received another dispatch from Nigeria via e-mail.  Below is this note along with LG's comments in brackets, provided to give readers of The LG Report insights into how an internationally-known honorable man (LG) thinks, in the hopes that you too can attain this venerated status.

......we fight against fraud, funds delay and impersonation. [Phew, for a minute there LG was afraid this was another fraud!  And who can't love a "funds delay" fighter?!]

Zone A9 Central Area  [LG is not familiar with the "Central Area," but it sounds very centrist and not too far left or right.  Also good.]

This letter will definitely be amazing to you because of its realistic value. [LG is already amazed at this string of words which one doesn't normally find together in English!]

Sorry for the inconveniences that was rendered to you in your line of Inheritance Payment transaction with some impersonators some while ago. [Think nothing of it, LG didn't even realize that he had been inconvenienced.]

I know that this letter will hit you by surprise, but firstly I will like to introduce myself; I am (Mr. Ayoola Olayinka) [LG knew a kid by that name in 4th grade, very common] the Legal chairman of "ICPC", (Nigeria's Anti-Fraud Unit). [That's very comforting.  Is that related to the "Anti-Funds-Delays" Unit?]

On the 1st of October 2009, the former President of The Federal Republic of Nigeria (Chief Olusegun Obasanjo) [Wonder if he plays that banjo?  That would be a coincidence!] introduced a Commission named the "ICPC", (Nigeria's Anti-Fraud Unit) [Yeah, LG got that already in the previous paragraph; He wouldn't be inheriting all this money if he were that dumb!] which is duly registered under the United Nations (U.N.O). [LG didn't realize that "United Nations" was abbreviated with an "O" in it. Must be a French thing.] This particular Commission was initiated to detect fraud/funds delay/impersonation of Government Officials.

Secondly, we are mandated by the Government to settle foreign debts/fraud victims/Un-paid beneficiaries to satisfactory [Note: Your English is not satisfactory] in other to maintain peace in the world at large and also to create a good relationship with the international bodies. [Wow, LG hopes he can help out with your important work. Where should he send his banking information?]

Presently, we are being paid by the American government in other to avert beneficiary funds delays/fraud here in . [You guys have a real problem distinguishing between the words "other" and "order."  You should work on that, as well as order problems.]

So far in this present year, we have settled the likes of (Mrs. Debbie Hargrove, Mr. Michael Wagner etc).You are being contacted by this office today dated (4th of January 2012) because your Case File (A) is the very first File on our Settlement Files Cabinet. From our intelligent investigations and Probing processes we discovered that you are a victim of fraud/funds delay. [Hot dog, finally someone realizes that LG is the victim of funds delay!!]

The "ICPC", is faithfully under my governance as the Legal Chairman of the great Commission and to this Authority I took an oath of allegiance to settle all fraud victims peacefully. [Excellent, LG knows he can trust anyone who took an oath. That's gonna seal the deal.]

This Memorandum is to notify you that you will be settled by the Nigerian Government from our initial Deposit Account. [Great, that's the account LG wanted, now he knows you're legit.] Your settlement will be actualized within 3 working days after your response to this Official Letter. [So easy, and here LG has been trying to self-actualize for years.]

For further clarification/investigation kindly send the below information to us immediately:

3. Your inheritance funds value. [Isn't that in your records?  Now LG is losing respect for your lack of organization.  Maybe LG will try to scam you and get more than he's entitled to!]

4. Amount, which you have lost previously.

These above-mentioned informations will officially enable us to carry out our verification processes and after that your compensation sum/Inheritance Funds will be Electronically wired into your designated Bank account or through a Diplomatic Delivery Service, depending on which mode you prefer. [LG prefers to be paid in Canadian lottery tickets.]

Your immediate compliance to this will expedite actions on your Payment because here in this office, we have a lot of listed victims to be settled. [And the victims list is growing daily, LG is sure...]

Hon. Justice Emmanuel Olayinka Ayoola [Above you were simply "Mr. Ayoola Olayinka." In a few short paragraphs your name has become transposed and you've gained an "Honorable Justice" title, LG is starting to smell a rat here...]

Chairman ICPC Nigeria  [OK, LG forgot that you're associated with the prestigious ICPC, the requested information will be on its way to you shortly.  LG can't wait to get his inheritance!]